Get your Swagger on with Delphi

So you want to build a new REST server (using Delphi or C++) and want it to become really popular and easily used by other developers. Imagine….

With the release of RAD Studio 10.1 Berlin, it is now possible to do all the above thanks to the new documentation attributes used in EMS packages that create YAML documentation that can be used with Swagger.

In short, YAML is a human friendly data serialization standard for all programming languages that is a subset of JSON.

Both JSON and YAML aim to be human readable data interchange formats. However, JSON and YAML have different priorities. JSON’s foremost design goal is simplicity and universality. Thus, JSON is trivial to generate and parse, at the cost of reduced human readability. It also uses a lowest common denominator information model, ensuring any JSON data can be easily processed by every modern programming environment.

YAML can therefore be viewed as a natural superset of JSON, offering improved human readability and a more complete information model. This is also the case in practice; every JSON file is also a valid YAML file. This makes it easy to migrate from JSON to YAML if/when the additional features are required.

Swagger is a simple yet powerful representation of your RESTful API, and as part of the open tools initiative (joining November 2015) it is backed by members such as Microsoft, Google, PayPal and IBM.

Using a YAML document, you can create Swagger instance of your API.

With the largest ecosystem of API tooling on the planet, thousands of developers are supporting Swagger in almost every modern programming language and deployment environment making it a great choice to make your REST server easily integrated and used by others.

With a Swagger-enabled API, you get interactive documentation, client SDK generation and discoverability.

To gain the benefits of Swagger you need to create the YAML documentation; this is achieved using a number of new attributes defined on the custom API’s you are creating. The three core Custom API Documentation attributes are:

In addition there are two additional documentation elements that allow you to define EndPointObjects that are used by your API. This way you define structures that are returned, rather than just returning simple types.

With Rad Studio 10.1 Berlin, in the samples, there is a new demo that covers the above custom api documentation attributes. If you want to open it in the IDE, choose “Open a sample project” and browse to the following folder and open the APIDocDelphiAttributes.bpl package (cpp equivalents also available, swap Delphi for CPP in names).

As this sample uses InterBase, you need to make sure you have started InterBase. If its not running, use the IBServerManager to make sure its running.

Rather than cover each of the attributes here, and repeat the documentation, I’ll leave you explore the links above to read up on these attributes, instead I want to use this sample to explore the YAML using Swagger UI, but first lets get the YAML document by running the sample.

Getting YAML from EMS Sample

Compile and run (F9) the sample project and choose Open Browser. You should now see a call to http://localhost:8080/version showing version 2.1 or higher.

To get the documentation from the server, navigate to http://localhost:8080/api where you will see the different documentation types supported.

This shows 2 currently. apidoc.yaml and apidoc.json. Add these to the end of the API url to see how they look. e.g. http://localhost:8080/api/apidoc.yaml

So you have a YAML document.. now what? Swagger UI is a great tool for reading the YAML document and giving you interactive HTML documentation for your RESTful API.

You can download the latest Swagger UI from GitHub onto your development machine https://github.com/swagger-api/swagger-ui

Unzip the download on your development machine / vm. In there locate the dist folder and open the index.html

A note on CORS

Now before we go any further, your need to be aware of CORS – Cross Origin Resource Sharing. In short, because we will want to enable PUT, POST, DELETE from outside the core domain, we need to allow CORS (or you will not be able to call EMS)

You can either update the EMS configuration to allow CORS or install the following google chrome plugin. If you install the plugin, once you have the SwaggerUI index.html page open, you need to make sure its enabled. (i’ve sometimes found I’ve had to disable and re-enable it to get it to work).

Copy the URL for the YAML document and post it into your SwaggerUI/dist/index.html page, and choose Explore.

You can now browse and invoke the API calls directly from the SwaggerUI interface. The example creates a category called Sample Tag (which you can see listed) All the other categories cover the default features of EMS, including User security, and the new ThingPoint EdgeModule API’s

You can now explore the categories, review the documentation model that defines the structure being return (thanks to the EndPointObjectXXX attributes) 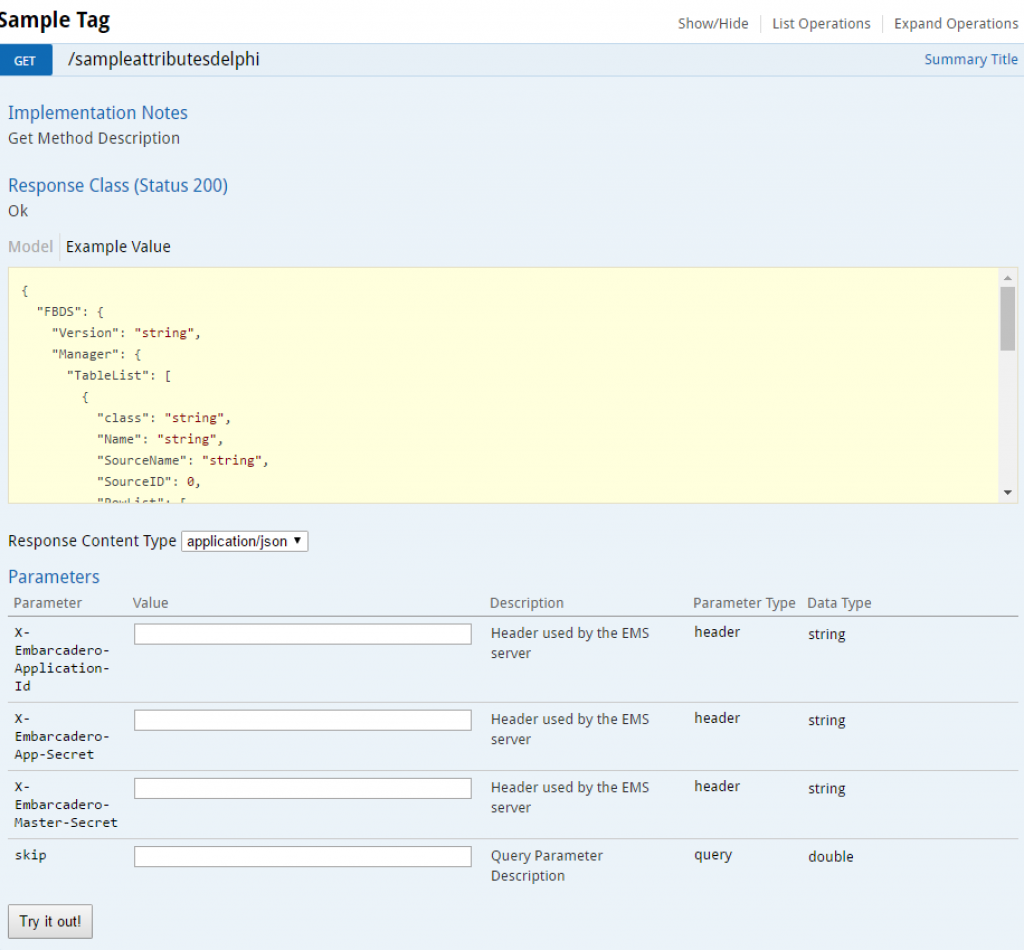 … and once you fill in any defined parameters you can “Try It Out”. This shows the URL called, and also the response body!

That is it! How simple to test you RESTful API than by using YAML and Swagger UI.

You can now explore Swagger.IO and learn about the other languages that you can create connections into your EMS server with 🙂

9 thoughts on “Swagger / YAML and self documenting RESTful API’s”

This website uses cookies to improve your experience while you navigate through the website. Out of these, the cookies that are categorized as necessary are stored on your browser as they are essential for the working of basic functionalities of the website. We also use third-party cookies that help us analyze and understand how you use this website. These cookies will be stored in your browser only with your consent. You also have the option to opt-out of these cookies. But opting out of some of these cookies may affect your browsing experience.
Necessary Always Enabled
Necessary cookies are absolutely essential for the website to function properly. This category only includes cookies that ensures basic functionalities and security features of the website. These cookies do not store any personal information.
Non-necessary
Any cookies that may not be particularly necessary for the website to function and is used specifically to collect user personal data via analytics, ads, other embedded contents are termed as non-necessary cookies. It is mandatory to procure user consent prior to running these cookies on your website.
SAVE & ACCEPT